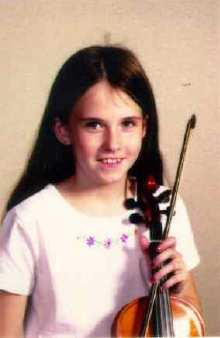 This is Jennie Cook-Kollars as a child. She liked paint, glue, tape, glitter, and so forth, and made some project every couple of days. Her first household chore was to put out the placemats on the dinner table. Jennie is her mom's mom's name.

When she was small she really liked it one day when an ice cream truck stopped by. I knew such trucks were rare and would only keep coming if there was steady business, and I was terrified of not hearing the truck soon enough or not opening my wallet fast enough or not having the right change or being too hard to find or not being there at all, and so causing Jennie and Caleb to miss the ice cream truck. So I put an envelope on the low bulletin board they could reach easily and put enough one dollar bills in it for two kids visiting the ice cream truck twice, then told her when she heard the ice cream truck to "just get the money and go to the ice cream truck, it's always okay". (An envelope with cash in it might not have worked with older siblings "supplementing" their allowance when nobody was looking. But as there were no older siblings to worry about with Jennie and Caleb, it worked fine for them.) After the ice cream truck came I'd simply remove any loose change from the envelope and restock the one dollar bills. This worked really well for many years.

Many years ago Jennie's combined first and second grade class did their own web project and Jennie had her own page. She also drew a webpage for this website at that time.

As she grew Jennie moved through elementary and middle and high school and undergraduate college and lastly earned her Masters in Geology from Lehigh University. (Geology combines uniquely well with her heavy background in Chemistry.)

Both the middle school and the high school she attended occupied a school building that was freshly constructed when she started middle school. The remarkable layout of the new school occasioned a lot of comment from surrounding towns. Sharing a building, even with separate entrances and closed doors between classrom areas, isn't especially common.

She spent an awful lot of time in high school working the auditorium and stage lights for the drama group, in the end being involved in all twelve drama productions over the course of her time. She was sometimes teasingly called the "queen of lights". Her younger brother, who joins her in many activities, also inherited a commitment to the high school drama "techie" group.

Currently she and her husband live in Pennsylvania.

She'll always be a part of the Kollars family.