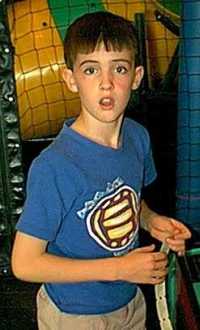 This is Caleb Cook-Kollars. Caleb is an old New England name, and also a biblical name, which we chose because it's not common.

He soon outgrew babyhood and was old enough to enjoy playing in the snow. Except there wasn't too much snow that winter. He was lured outside when spring came. Outside had a sandbox, trucks, swings and slides, growing plants, bugs, in general lots to entertain a little boy. Caleb attended Christ Church preschool for two years, the second year four mornings a week, then Paul F. Doyon Elementary, one of the schools in Ipswich, then moved on to Ipswich Middle School, and Ipswich High School and finally to undergraduate studies at Rensselaer Polytechnic Institute (RPI) in Troy, New York, from where he graduated in Spring 2014.

He interned during a couple years of high school and for some summers at New England Biolabs. He has been much more than just a rote lab assistant or grunt labor for the boring parts. After the first couple years, it got so I couldn't even follow his descriptions of what he was working on any more (and I'm an armchair scientist who can usually grasp the outlines of any scientific research). He's worked a lot of course with DNA polymerase reagents, and has also done some quality control work, and worked on something to do with fast sequencing of large genomes. Rubbing shoulders with high-powered researchers all the time as he did, what seems normal to him is in fact something only a handful of undergrads nationwide could keep up with.

He used to do a lot of things together with his older sister before she went off to college, including hanging out at the climbing wall in the gym and around the theater stage lighting. He of course still does things with kids he knows from school. For example at one point he was part of a kids-only expedition that paddled kayaks through a marsh to primitively "camp" on a deserted island that was totally wild (even though it was actually less than a mile from some regularly travelled roads).

As a young child he was interested in all kinds of building sets, including Lincoln Logs, Brio Mec, Giant Lego, Tinkertoys, K'nex, Zoobs, and Robotics. He focussed in on just K'nex as an older child, probably because nothing else could easily build something six feet tall. He's also interested in taking old broken things apart; for which he uses a hammer less freely than in younger years. He and I once built a "robot" that moved under its own power (batteries) and was controlled remotely by radio buttons (garage door openers).

He was quite interested in "board games," not just simple ones but also difficult ones like Go and Backgammon. He even had an interest in Chess. Many years back I thought Caleb was clearly too young to be playing Chess, until I helped monitor a chess tournament here in Ipswich for contestants under ten. There were quite a few entrants, and they played much better than I expected. Way back then I got him a computer chess game, and set its play level as low as I could at the time (only 1-ply look ahead, no think ahead, and no use of an openings book). But Caleb still thought it was "too hard." Anything that never made a mistake was beyond him. We later picked up the old row game packaged in a distinctive red tube Pente (a lot like Go-Moku), and he understood the game instinctively so well he frowned at silly play situations that I didn't even recognize, and beat me so easily and regularly that too has passed.

In August 1999 he got a Pokemon cartridge for his GameBoy, which was the beginning of his being lost in Pokemon. In early December of that year he "beat the game" by capturing (all) 150 Pokemons. The game then started itself over. Next he figured out how to link GameBoys and play against other people or trade Pokemons (or clone one into two by cheating just right) and remained enchanted with it. Then he moved up to a GameCube and "borrowed" games either from friends or from the local store, still sometimes exploring games that had Pokemon characters. Then he moved on again to a Wii. He's quite proficient at playing these video games, solving and responding to puzzles and situations much much quicker than I can even comprehend them. With so many beckoning horizons in high school though his video game time was a little less than it once was. He figured out how to set up a reliable and speedy game network tied to a large screen TV, and became the default video game host for all his friends.

He had the boundless interests and curiosity of a young boy, and sometimes wondered about things that seemed beyond his years. Many years ago he asked me what makes a magnet sticky. After my hand-wavey explanation about spins, he asked "what does it mean to have the spins line up?"

He learned to play the saxophone and liked it very much for many years. He mostly played the alto saxophone, although he picked up a soprano saxophone a few times. It was amazing to watch him go from complaining about carrying the large heavy instrument as he did at first to being a senior member of both the regular band and the jazz band at school, as well as the "saxophone quartet" that was sort of part of the jazz band and sort of an independent entity. He is quite fond of jazz, recognizing pretty much everything in my CD collection that matches a track in his iPod collection. When his older sister Jennie added the oboe several years ago, he also picked up on the oboe (using a separate reed:-). He says it was fairly easy as the fingerings were quite similar to the saxophone. It didn't stick, but I was amazed at how even for a short time he played the difficult double reed instrument so musically with only very minimal guidance.

For a while his main interests were "dart guns" and RC (radio controlled) vehicles. Thank goodness for recharcheable batteries. He used both a tiny Zip-Zap, and a larger truck that did wheelies (and jackknifes). He also had one of the Twisters, but didn't use it so much because it was too hard to control (the front wheels flipped over instead of turning). The control difficulty is probably why the demo had the cars running in a sort of small corral rather than completely free, as in a corral, every edge was a potential backflip or twist or ricochet.

He added the formal education at RPI to an instinctual feel for electronic devices to become very good at figuring out and modifying just about anything ...if he's interested. Nearly three years of his RPI time were spent as part of the extracurricular student team that worked on constructing and driving a hybrid/electric racecar in competition. The RPI team is fairly unique in that intercollegiate competition for having virtually no faculty involvement. Generally the hardest part of getting him to solve a problem is getting him motivated to pay it serious attention. The last year at RPI he explored pretty much every option the outing club offered, typical things like hiking and camping and skiing, and more unusual ones like cave spelunking.

Like many graduates these days, after graduating from RPI he spent six months living back home, taking advantage of local social opportunities, and searching for employment. In the end some combination of his technical education, interpersonal skills, and luck broke his way, and he got a one-year position at Lincoln Labs, the prestigous MIT-associated national security research and development organization. He has to get a security clearance just to see what he'll be working on. Hopefully the one year will turn into longer term employment. But even if not, being able to include work experience at Lincoln Labs wlll make for an impressive resume that should open other doors.

Several years ago I almost passed him by when I saw only his back because I thought such a tall person couldn't be him. But it was; he had grown taller than me. He's even taller now, and is sometimes teasingly called The Friendly Giant. He's had his own extra long mattress for years, as sleeping on a regular length bed would be out of the question.

He's part of the Kollars family.