To find out more about the people in the Kollars family, click on their picture. The people are dad Chuck, daughter Jennie, and son Caleb. There have usually been two cats in the family too. In the early 1990's DJ died of feline leukemia. Several years later Squeegee died of old age. They were replaced by kittens born in western Massachusetts in the fall of 1998 named Lacey and Chip. The new cats grew up in the house. But Chip got hit by a car and killed, and replaced by Sharla, who came from the local shelter as a kitten. Although Sharla's body is now grown up, she still acts like a crazy kitten. She gets into all kinds of messes, has tipped over several objects, left footprints in wet paint, and doesn't get along with Lacey.

An important part of many families is the kids. Here's another picture of them. To find out more about either one, click on their picture. 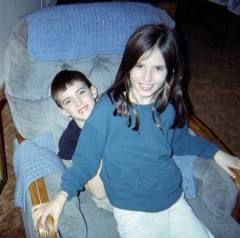