I grew up in this family in Bremerton Washington. Bremerton is west of Seattle, a ferry ride across Puget Sound. There's a naval shipyard in downtown Bremerton and the Bangor naval submarine base just to the north.

My parents lived most of their adult lives in the same house we grew up in (except when I was a very small child). That house, which used to be in "the country," is now surrounded by tract houses and near major shopping areas. It first went up in value as the town grew around it, then later went back down in value as the neighborhood grew unfashionably "old".

The surname Kollars is fairly unusual. It turns out that folks with that surname in the USA are probably all related. The name --originally Kolash ("wheel maker")-- came from Bohemia (currently a major part of Czechoslovakia), and the spelling was mangled during immigration. The original immigrant came to the town of Crofton in northeast Nebraska, and many of the Kollars diaspora trace back to that town. A distant relative put a lot of effort into capturing the Kollars family tree. The results of that effort seem to not be available online any more, but fortunately I got a copy before it disappeared, and have tweaked and extended it. Here's the current Kollars family tree. 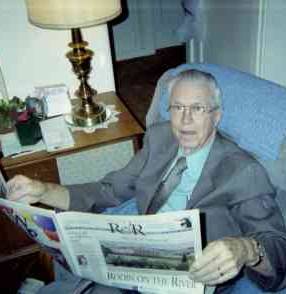 Dad grew up on a farm in Nebraska, then left it in hopes of becoming a CPA. He was drafted into WWII, and served in the Pacific Ocean. After the war he went to college in the Pacific Northwest on the GI bill. Educated as an electrical engineer, he got a job at Puget Sound Naval Shipyard in Bremerton. He lived in that town all his adult life, getting married, raising a family, retiring to part time work, then retiring from that too. He's always been a gardener --he used to unwind from the office by "watering the garden"-- and remained very fond of his large vegetable garden (initially 40'x100' - it shrank a bit in later years).

Eventually he and Mom moved into an extended care community. After a few more years he was attacked by Alzheimers, which soon became quite advanced. Unlike many Alzheimers patients though he retained his very even temper. And Mom watched him so well he was able to stay in the same apartment to the very end without ever wandering away. His fragile but stable state promised to continue for a long time. But then in early 2013 he fell and broke his hip badly. Once destabilized (and perhaps suffering some additonal strokes as well), he couldn't cope with the subsequent medical interventions and relocations, and passed away. Fortunately the medical staff and the staff at the extended care facility avoided over-medicalization and gave him what was effectively home hospice care, so he died peacefully and painlessly in his own apartment.

Dad bought a camera shortly after he got married, and took slide photos all the rest of his life. That doesn't seem like a big deal these days when cellphones take picures and everyone is awash in snapshots. But back then when clicking the shutter cost a dollar, sticking with taking pictures for a whole lifetime was unusual. The little kids seen in the early pictures are now past retirement. My sister Ruthie ran those slides through a scanner; here's the whole collection of pictures. 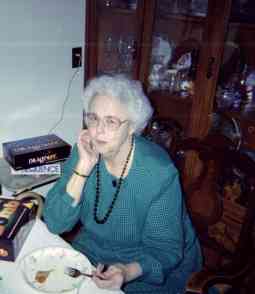 Mom grew up on the edge of Spokane Washington, in a small close-knit community centered on truck gardening, in what would have been desert landscape if not for some springs. Water was important there. A motel a little down the road from her homestead never opened because they couldn't get an adequate water supply. Her house got its water from a well that tasted funny because of a high iron content. What water there was travelled in strange ways through the old rock that surfaced in hexagonal columns, for example blasting for a new road caused one swimming pool to constantly have extra water flow into it so the only way to keep it from overflowing and making a mess was to run a pump backward all the time. She went to college for a couple years, then got married (the joke back then was the college degree was an "M.R.S.") and settled in Bremerton and stayed there all her adult life. She helped with secretarial things at her church for many years.

Eventually she and Dad moved into an extended care community. As Dad's Alzheimers got worse, her principal occupation became watching him and maintaining a very regular schedule for him. When Dad passed, all those chores that had faded into the background came back to the fore, so her time was fully occupied. As she aged, she had more and more trouble getting around; the last few years she relied heavily on a motorized scooter (as well as the staff in the extended care facility).

In early 2015 Mom suffered several small strokes, which combined with the effects of an incompletely healed skin infection she had suffered months before. The staff at the extended care facility discovered her problem in less than an hour; medical technology was valiant but ultimately defeated by old age. After things got too complex, in accordance with her medical directive that had been established several years before, she refused further medical treatment as well as food and water. The hospital moved her to a different area, cared for her very well, and supplied small doses of pain medication as appropriate so she wasn't uncomfortable. She then passed away in just a few days. 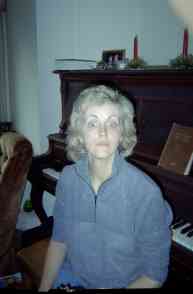 My sister Ruthie is only about a year and a half younger than I. After high school and college she went on to graduate school to get a Masters in speech pathology. That was a lonely time for her, going suddenly from her undergraduate existence that was full of people and events to being all by herself. She's lived in a lot of different places, outside Portland Oregon, north of Oakland California, Mesa (Phoenix) Arizona, in Snohomish (Seattle) Washington, elsewhere in Oregon, and now back near Seattle. Almost every place she's worked in the local schools. Her twin daughters, who I remember as crawling infants, have now left college and married. For the past many years Ruthie has suffered from an unusual disease that makes her physical movements slow and awkward and makes her very tired. It's progressed very slowly but inexorably until she can no longer work even part time. Different specialist doctors have all scratched their heads. One gave the name "primary lateral sclerosis" (PLS) (not quite the same as Lou Gherig's Disease/amyotrophic lateral sclerosis), another used the name "spastic paraparesis", and so on. Perhaps the specific names "Familial Spastic Paraparesis (FSP)" or "Hereditary Spastic Paraplegia (HPS)" suggest the condition is better understood —and more cleanly linked to genetics in all cases— than it actually is. 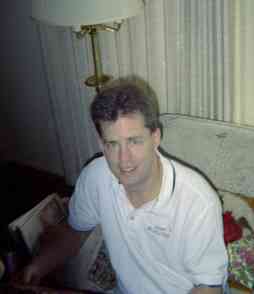 My brother Bob is a dozen years younger. He was like a second family, with Ruthie and me being the first. We were teenagers when he was a real little kid. He's quite athletic. He played intramural basketball at the University of Washington (a very large school with about 30,000 students). Later he coached the basketball team at a local private religious school. Even though he'd lived all his life in Bremerton on the Olympic Peninsula, he was initially priced out of the market for waterfront real estate by a glut of expatriate Californians. Instead, several years ago he bought a corner of the old homestead (which totalled a little over an acre) from Mom and Dad, and had a house built with a great view of the Olympic mountains. Many years later he moved his family to a different house in a better public school district (his kids were getting too old for the easily available option of private religious schools, since they only go up through eighth grade), and with the waterfront he's desired for so long. As he's moved up through the ranks at his job, it seems each step has required more travel rather than less. He commented "you know you travel a lot when you get a Christmas card from the CEO of an airline."