Although a confirmed Ipswich-ite, currently I live a couple towns away in my girlfriend's house in Beverly.

The material below was written before I moved,
and has been retained verbatim.


I live in downtown Ipswich Massachusetts in the upper story of this house on the corner of Central Street and Hammatt Street. This old house has been subdivided into four parts. Three are apartments (one a studio), and one is a barber shop. Like many older buildings in Ipswich this follows the pattern of combined commercial/residential use, which is once again popular. 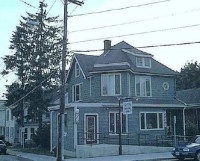 I really like the central location. From where I live I can walk to the post office, the bank, the shrink, the coffee bar, the auto repair place, some live music, the library, town hall, the pub, a couple convenience marts, several restaurants, and our riverwalk. I only get in my car to drive just a bit further to the grocery store or drug store or the town's combined middle/high school. Downtown Ipswich is quite small. Most of the commercial establishments are around the single deeply shaded block. And the larger lightly shaded rectangle around which I used to walk most every day to get some exercise encompasses more than half of greater downtown.

I'm less enamored of the heat, although to date the location has more than balanced it. My apartment is on the top floor of this old house, and gets very hot on sunny summer days. The sun beats on the roof and heats the attic all day, then that heat radiates down through the ceiling into my apartment at night. (The temperature in my apartment is typically highest in the evening after dark!)

Whenever I've mentioned the heat problem to various people over the years, their response has always been the same: "just get a bigger air conditioner". I've been rather appalled that the universal response to doing something stupid is to just use more energy. Over these many years, not a single person has ever even mentioned thinking about whether such a use of air conditioning would be environmentally responsible (or even whether there might be other alternatives). Nor has anybody ever considered the idea that I might not be physically capable of sticking an air conditioner out the window without dropping it (I'm not). Nor has anybody ever considered that the electrical wiring in this old apartment might not be up to the load (given that everything except the kitchen is on just one circuit, it's probably not).

When the house isn't sited right or built right or insulated right -as this one isn't- attempting to use air conditioning to compensate would just result in expensive electricity bills, yet without lowering the temperature a whole lot. When there's a contest between the monster full sun and a brave little air conditioner, the sun will win hands down. Homes that use air conditioners prudently put them in rooms that are already a bit cooler, not in the hottest room in the house; the same rule of thumb applies here. Air conditioning may be a reasonable option for some other units in this building, but not for my apartment, since it was the hottest part of the old house before it was subdivided (i.e. the unshaded part of the top floor).

A few years ago I hit on the idea of in summertime having a window fan blow hot air out of one of the attic windows. Even though it's not really a proper "exhaust" fan, it's made more difference in my heat problem than everything else put together. When retrofit insulation work in the attic rendered that insufficient, I extended my scheme to automatically open the attic windows nearly every night, then close them when the sun came up. I accomplished this with an Arduino (micro-computer) controller, some linear actuators, and a lot of DIY wiring kludges.

If you want to come visit Ipswich either take the MBTA commuter line to Newburyport (not the one to Rockport which starts on the same tracks) and get off at Ipswich, or drive a car into Ipswich.