We in the U.S. are fortunate to have quite a good government. Good isn't perfect though - let's further improve our government, making it even better than it already is. Although topics like rationalizing the Electoral College are intriguing from a theoretical standpoint, to me they're secondary. The really important next round of improvements are:

Refinement #1 - Get The Money Out Of Politics

Wouldn't it be nice for us in the U.S. to not have to bite our tongue whenever someone jokes we have the best legislature money can buy? And to not be bombarded with quite so many "advertisements"

Besides weighing corporate influence and party influence too heavily, there's also the matter of keeping legislators too busy to work for us. Even after they're elected, legislators typically spend at least half their time on fund-raising activities. What if they were free to work for us full-time instead of only half-time?

Most of the money legislators get is spent on elections (much of it on showing and re-showing and re-showing all those short almost content-free TV ads). There's a simple solution: publicly funded campaigns, as in many European countries. (And nobody gets a blank check either - when limited funds run out, that's it.) Furthermore, use of public funds for campaigns should be mandatory and exclusive. Because of the historical development of our laws, it may in fact not be possible to have a law that de facto requires "mandatory" public campaign financing. In that case, it would be up to the electorate to de jure impress on candidates that they must commit to the public funding option: if a candidate uses any private or privately raised funds, don't vote for them ...ever ...no matter what.

A part of public campaign financing is reversing the citizens united court decision. When countries were overhauling their laws to allow 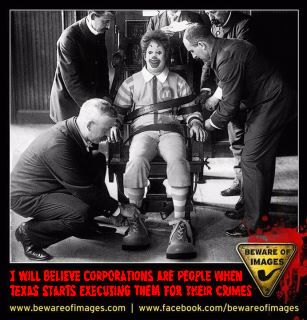 corporations to continue beyond the lifetime of the original investors, and to limit shareholders' liability to the amount of their shares (rather than everything they owned), the U.S. skipped a lot of legal complication by simply treating corporations as persons. But a negative consequence of that shortcut has come back to bite us. Our supreme court has now ruled that corporations have the same "free speech" rights as people. And since giving money to an election campaign is interpreted to be an expression of free speech, corporate donations to campaigns can't be arbitrarily restricted. The net effect has been to halfway gut what few campaign finance laws do exist in the U.S., and to give even more political influence to corporations.

You may know the name Lawrence Lessig from his efforts as the key motivator behind the Creative Commons licenses. Frustrated that the views espoused by Creative Commons gained traction everywhere except in congress, he determined the root of the problem was the influence of money on our politics. In fact, he's shifted his focus to getting the money out of politics. He's written a book about it: Republic, Lost: How Money Corrupts Congress--and a Plan to Stop It, which posits money in politics is a serious problem that needs to be taken very seriously.

Our election campaigns are incredibly long. Our presidential election campaigns take more than a year out of every four. Do you remain interested for that long? Our elections are inefficient: they require an awful lot of effort by each citizen, yet collect only a very small amount of information. Worse, they completely prevent citizens who can't spare parts of two days from participating fully - if a citizen has to take time off work, or arrange a babysitter, or whatever, they should at least only have to do it once (not twice as they do currently). Maybe the inefficiency helps explain why the U.S. typically has the lowest voter turnout rate of any democracy. Yet another problem: the candidates are quite often awfully polarizing.

We're so used to general elections in which there's one candidate from each "party", we sometimes forget there's nothing in our constitution requiring it to be that way. Currently we permit "primary" elections to pre-select just one candidate from each party, delegating an awful lot of influence to a few early primary states such as New Hampshire. Do you think your own views are fully and accurately represented by those who live in New Hampshire? If the two best candidates happen to be from the same party, why not let them run against each other in the general election?

The differing natures of separate "primary" and "general" elections motivate candidates to "run to the edge" during the primary but then change course and "run to the center" during the general. We virtually require our candidates to say one thing for the "primary" election but something else for the "general" election. We already have plenty enough problems with politicians saying more than one thing, without giving them an incentive to dissemble even more.

Primary (or first round) and general (or runoff) elections typically don't poll the same electorate. There's often a month between one election and the other, yet it takes only a few days for a significant proportion of voters to change their minds. So general election voters often find they no longer like either candidate, even though they voted for one of them in the primary election. As a result, the message voters send to those who are elected is forced to be unclear right from the start.

Worse, separate elections encourage "stragetic" voting, voting in the first round for somebody you don't really prefer in hopes of getting the right candidates into the second round while at the same time sending a clear message. Unfortunately even though it seems to make sense to each individual, the average of all the individual decisions is quite murky. Separate primary and general elections keep tempting people to try strategic voting, even though it typically actually muddles both the message and the voting, and sometimes even results in the election of a candidate few actually favor.

All of this could be addressed by just one refinement: Have only one vote per election, by using a voting method that always fairly produces just one winner without any preliminary or runoff voting. Several such voting methods exist, and are already in common use in some other places worldwide.

We're so used to one particular voting method, we easily forget there are in fact a whole lot of different voting methods:

plurality, majority, first-past-the-post, proportional, one-stage, two-stage, runoff, and so forth. Even restricting consideration to only voting methods that always identify a single winner after only one stage, there are many options: various Condorcet methods, various Borda counts, Instant Runoff Voting (IRV), Approval voting, Range voting, and a host of modifications, refinements, and combinations of more basic methods. It's been theoretically proven that none of them is mathematically perfect; there is no "best" answer. So choice of voting method should focus on simply matching the method to the need (arguably the current U.S. voting method is an especially poor match to what it's supposed to do).

Currently IRV has the most support for a possible new voting method. It always works without either Primary or Runoff additional elections; it's easy to explain, understand, and cross-check; it doesn't require significant re-education of voters that are used to plurality methods; and it's not a whole lot worse than more complicated methods that further reduce apparent flaws in some theoretical (bizarre?) cases.

"Gerrymandering" is the practice of drawing nonsensical legislative district lines, to either empower or deemphasize a particular group, or most often to produce "safe" districts where the winner will almost always be from one political party. It's frequently used to give a significant advantage to incumbents, thus resulting in both firmly entrenched legislators who stay an awful long time and almost no real representation for the "extra" citizens in a district that don't fit its stereotype, but don't have enough voting power to select anyone else either.

The practice is named for Elbridge Gerry, who was a Massachusetts politician a long time ago and was one of the signers of our Declaration of Independence. The word is a combination of Gerry's name and "salamander", which some of the districts looked like when mapped. (The first cartoon map that led to the name actually shows the figure of a "dragon" not a "salamander" ...but the term "gerrygon" apparently wasn't sufficiently memorable.) The term has become firmly entrenched, even though it probably isn't really accurate and probably isn't fair to Governor Gerry. It's clear that Gerry did not invent the practice. Nor seemingly was he the instigator behind the particular uses of the practice that resulted in the name. In fact he was apparently against the practice, although it was heavily used and abused by his party while he was in office.

I thought -based on my schooling- that gerrymandering had been forbidden in the U.S. and never happened any more. It turns out the only thing that's legally forbidden is gerrymandering with the effect of denying representation to particular races; although other uses of gerrymandering may be distateful, none of them are actually illegal. Once in a while the most egregious abuses of gerrymandering are punished, as Tom Delay from Texas and Tom Finneran of Massachusetts found out. Otherwise, gerrymandering is alive and well and occurs routinely and widely.

As currently used, gerrymandering's main effects are to:

Redrawing legislative districts every once in a while has to be done because people move from place to place all the time. Redistricting is triggered by new information from the decennial U.S. census; it happens every ten years. Considerable personal judgment is required. There's no unique "right" answer; it can't just be done mechanically/mathematically. For example, should a "suburb" be in the same district as its rather distant center city, or grouped with nearby suburbs of other cities? So, some group of people has to be in charge of redistricting; there are three common options:

Putting the legislature in charge is the worst option. Politicians -including those who will run for election within the new district boundaries- are to decide themselves where to draw those boundaries??? (In theory it's possible for a legislature itself to redraw districts in a fair way ...but in practice it doesn't happen often enough.) Although neither of the other two options is perfect either, they're less subject to corruption than having the legislature itself do the redistricting. A combination of the two, with both judges and citizens serving on the redistricting commission, may be a very good idea. Some ways to minimize corruption of citizen commissions are to select members semi-randomly and to let those members serve only once.

It's realistic to expect such government improvements. In fact, some of them are already beginning to occur. For example these bellwether changes in the state of California were considered over a decade ago, leading to this redistricting reform. Instant Runoff Voting (also called Ranked Choice Voting) began to be seriously considered in the U.S. several years ago, and is now being used in many places.

Proposals for improving our government tend to be rather diffuse, and their proponents not so laser-focused as we're used to (the phrase "herding cats" comes to mind:-). So this list is probably notably incomplete and woefully out of date. Nevertheless it may help you discover groups of other people pursuing refinements to our government: